Valuation criteria before the conservation treatment of an object

When I say that I am a paper conservator, the question is granted: “And, what do you do when a part is missing?” Inpainting is probably the main controversial in a conservation treatment, because it demands the establishment of criteria to solve the absence, and this implies to position in not at all trivial matters:
Which is the value or meaning of the object, how unique it is and which is its function (or the one of the loss) and with this, and also considering its conservation condition, conservators search for the adequate criteria to work on it.

The value or meaning of the object means:
Let’s imagine that today two unpublished manuscripts appeared, the first one written by Gaudí’s hand and giving concise directions on how to finish the Sagrada Familia; and the second one, a list of the workers that were going to work there. It’s now so easy to clear it up: we succumb to the unavoidable fetishism on the first case, considering every trace and every stain almost divine; whereas in the second case we would only be interested on the content, or unfortunately not even that. Book with bullet. The historical episode associated to this object varies its original value and meaning.

In meaning then, it is included the age, the historical background, the artistic quality of course, if it does have any, and finally the value of its materials (gemstones, paper, leather…); and these four aspects would make the object more or less meaningful, significant, or valuable.
Value is intangible, as societies have changing tastes and ethics, in time and in territories, and let’s not even think in individuals. It’s a subjective and mutable matter, the more we insist on appraising and looking at Christie’s records.

The unique aspect seems obvious:
When there is only one original, it is not the same as when there are several issues of the same category. It is more complex than it seems if we consider reproducibility of photographs, prints or etchings, but I’m not in that much detail now.

Book transformed in art (the opinion of the book’s author about the artistic value of this work is unknown).

To sum it up, hand-made stuff will be usually more unique than machine-made obejcts.

Function is almost automatic if the object is highly valuated in the two previous (very significant, very unique): it will be destined to be conserved and adored whether it’s a shit in a can or the Girona Beatus. In many cases the primitive function for which it was created will be relegated to a second term.
The less distinguished an object is, the more its primitive function will be considered, but not always.

Bench made of books

A book is meant to be read, it’s an unfoldable portable of words. If it doesn’t open and close, it doesn’t work anymore; as well as if its leafs get lost, or the text is unreadable. The same as a box is used to keep stuff in it, a toy to play, a fan to fan…
These functions will be still prevailing for less notable objects. But they can also acquire new functions: such as to wedge a table, be part of an artistic performance…

Attention! Because identical objects can have different functions: its attribution is arbitrary or subjective, though this affirmation can not satisfy those who ask for a concise and pautable answer. Let’s take for an instance two identical editions of the same book, with the same binding and similar damages. One is conserved in a showcase as an emblematical object in a museum, and the other is a non-restricted consulting resource in a public library. Maybe the first one had a story that confers it a special meaning: its owner, some manuscripted notes on a margin, that it belonged to a certain historical episode… it will have the value that its custodian, society, grants to it. If the second book doesn’t have any of these attributes it will be asked to accomplish more strictly its original function.

The conservator should understand which function is attributed to the object to apply criteria according to it, not by excess, not by defect. As freelance professional it is an exercise I must revise for each project, because even in the same collection (or client) intervention criteria can vary.

Taking for granted that my point of view at the present moment will scarcely satisfy a majority today; and that we don’t know which will be the values tomorrow… I will try to clear it up myself to justify my interventions, and if I am convinced in an 80% I will take it as a great success (is it now understood why restorers talk always about reversible interventions, that can be undone?).

I use to say that the easier it is to deduce what is missing, more legitimate it would be that the conservator undertook its in-paint seeking to make it the more unnoticed possible. Or also: the less outstanding is the loss (considering here the three concepts mentioned before) more license would the conservator have  to “finish” it, i.e. more assumable the possible error in his/her hypothesis would be. And we should add a last aspect, which is size, that does matter! Because the bigger a loss is, or the more areas it affects, less licit it would be to presume its aspect. 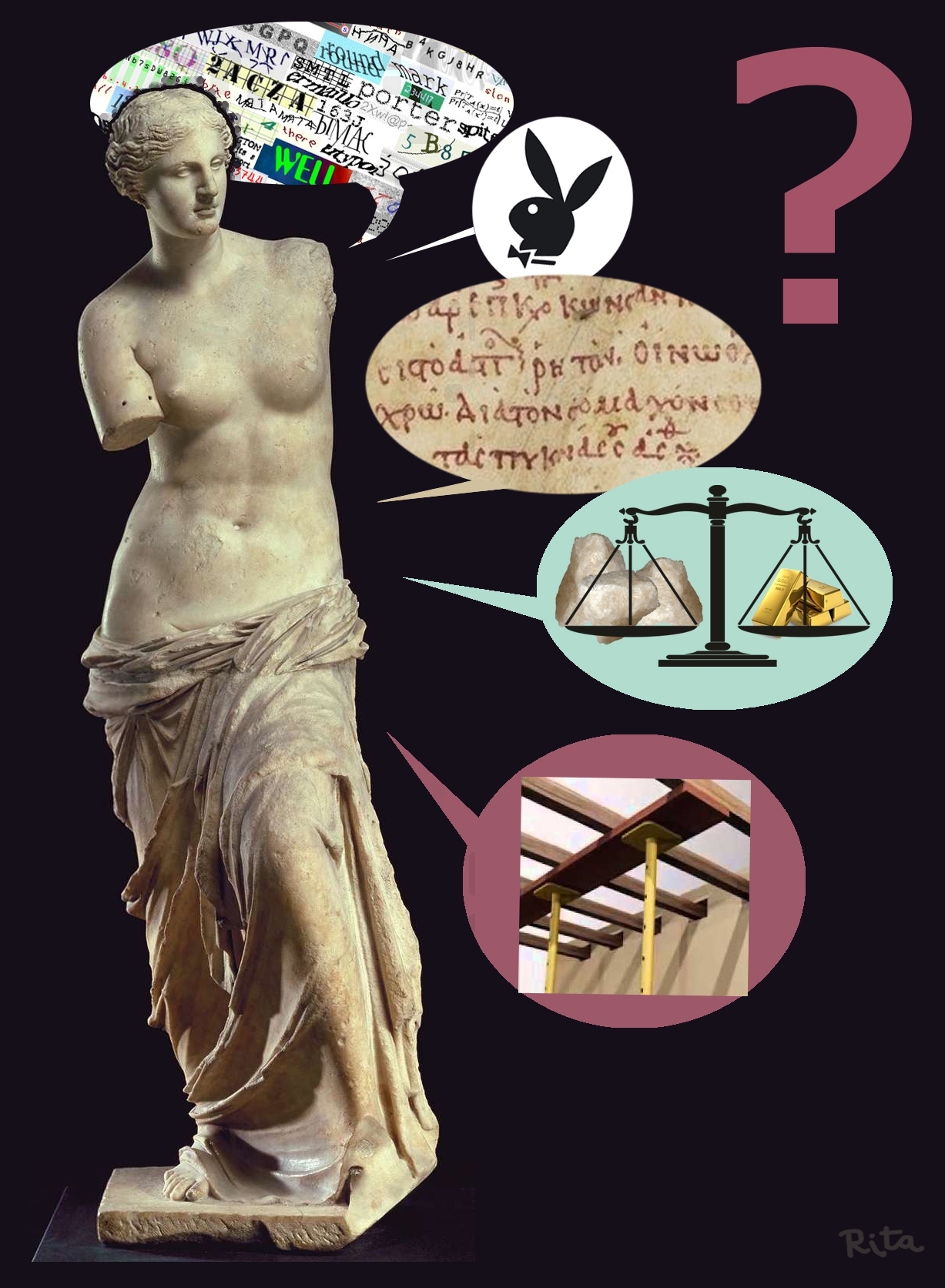 Venus de Milo, for example: Not any conservator in his right mind would think of continuing her arms… What was the girl doing? Who could have the certainty? Who would dare to walk a mile in the artists’ shoes to make an approximation, though admitting it was an hypothesis? Or what a bright spark would modify the authentic to give it a new point of view? It has so much significance for itself the way it is, that it already “works” even amputated. No one deems it is broken or not functioning. Who knows if two thousand years ago this piece of marble was a towel-hanger, or it had any other function (religious, cultural) that exceeded the “merely” artistic… The value and meaning that we attribute to it today vetoes any attempt to “fix it” and “improve it”, because it already works as it is.

To set the criteria while considering an intervention, I use a kind of control panel, such as sound equalizers:

And each object has a characteristic mixture of them all, which determines how legitimate it is to solve the loss, and how.
Since conservation is a human intervention, and in our society everything is at the end valuated with money, the last factor includes how much the hypothetical resolution of the inpaint would cost. We can measure it in spent time, in resources or in money… in the end it’s all the same. And, like it or not, the effort manageable in each case will be determined by the value of the object.

The most exciting cases to solve, for me, are those ones in the middle: kind of ordinary but with a certain distinction. These allow me to work on them but they don’t require the rigor (and horror!) of a famous artefact. They demand a treatment beyond the purely structural, but aren’t too iconic to leave me as a conservator de Milo: armless.

had a bunch of examples of treated gaps to illustrate this explanation, but it came out so dense that I’ll leave it for future posts!