This post shows the experience after the restoration of many of the architectural drawings from the Association of Architects of Catalonia (CoAC) and focuses on impregnated paper. It was presented on the context of the Symposium Technical Drawings and their Reproductions with the

All tracing paper, so commonly used in technical drawings, have in common its translucency. But significant differences in its elaboration process provide them with diverse chemical and mechanical properties and behaviour. The so called impregnated paper is one type of tracing paper in which a varnish or oil was added in order to bring transparency.

Impregnated paper has poor mechanical strength due to the oxidation caused by the varnish. It must be reminded that oils do not evaporate by a physical process, like water, but a chemical one (oxidation). The most commonly used varnishes suffer from inherent oxidizing degradation that causes brittleness and acidification, but varnishes also prevent cellulose from moisturizing normally (waterproofing) and confer the paper its particular fragility and stiffness (shellac, especially). 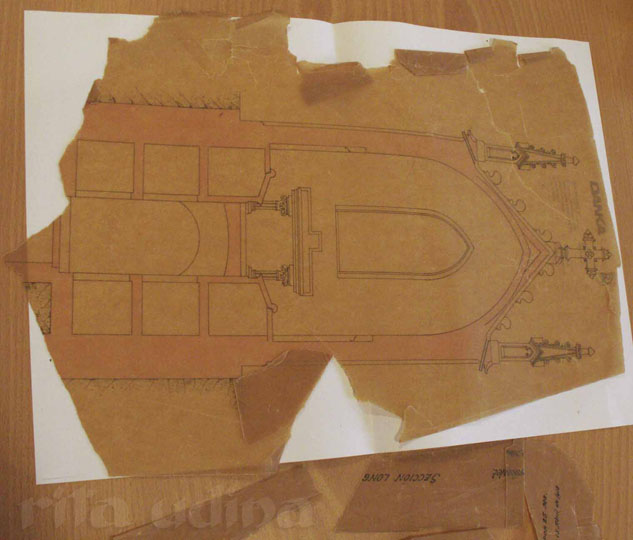 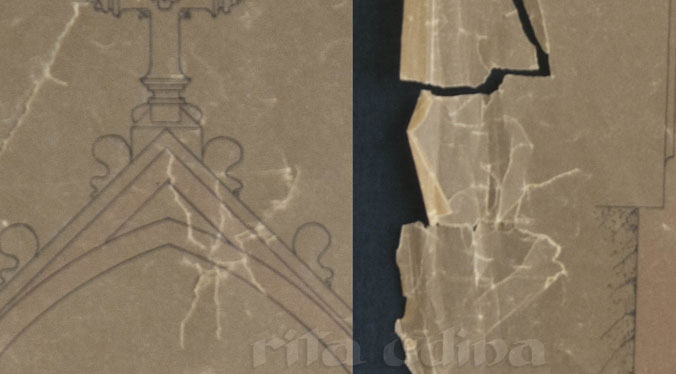 The fragility may be such that it completely impedes manipulation, since any ordinary and careful handling causes cracks or tears. Loss of flexibility causes sharp cuts on the folds (left image) and tears on wrinkles (right). Tears and cracks can be even more visible than the drawing lines.

The goals to achieve with the restoration treatment are:

Consolidation by addition of paper layers compromises a transparency that shouldn’t be modified, that’s why retrieving the lost flexibility is so important, as the less brittle is the original paper, the thinner paper layers are needed to reinforce it.
Yellowing is not considered a damage in itself, as in general it allows a correct lecture of the document, and doesn’t involve chemical damage (yet it is the visible effect of acidification).

Removing the varnish
This would avoid further oxidation damage and diminish some yellowing. The varnish is removed by solvent (varying each case, depending on the oil or varnish to be removed). After that, the paper becomes opaque, but then efficient aqueous treatments are possible, if suitable. 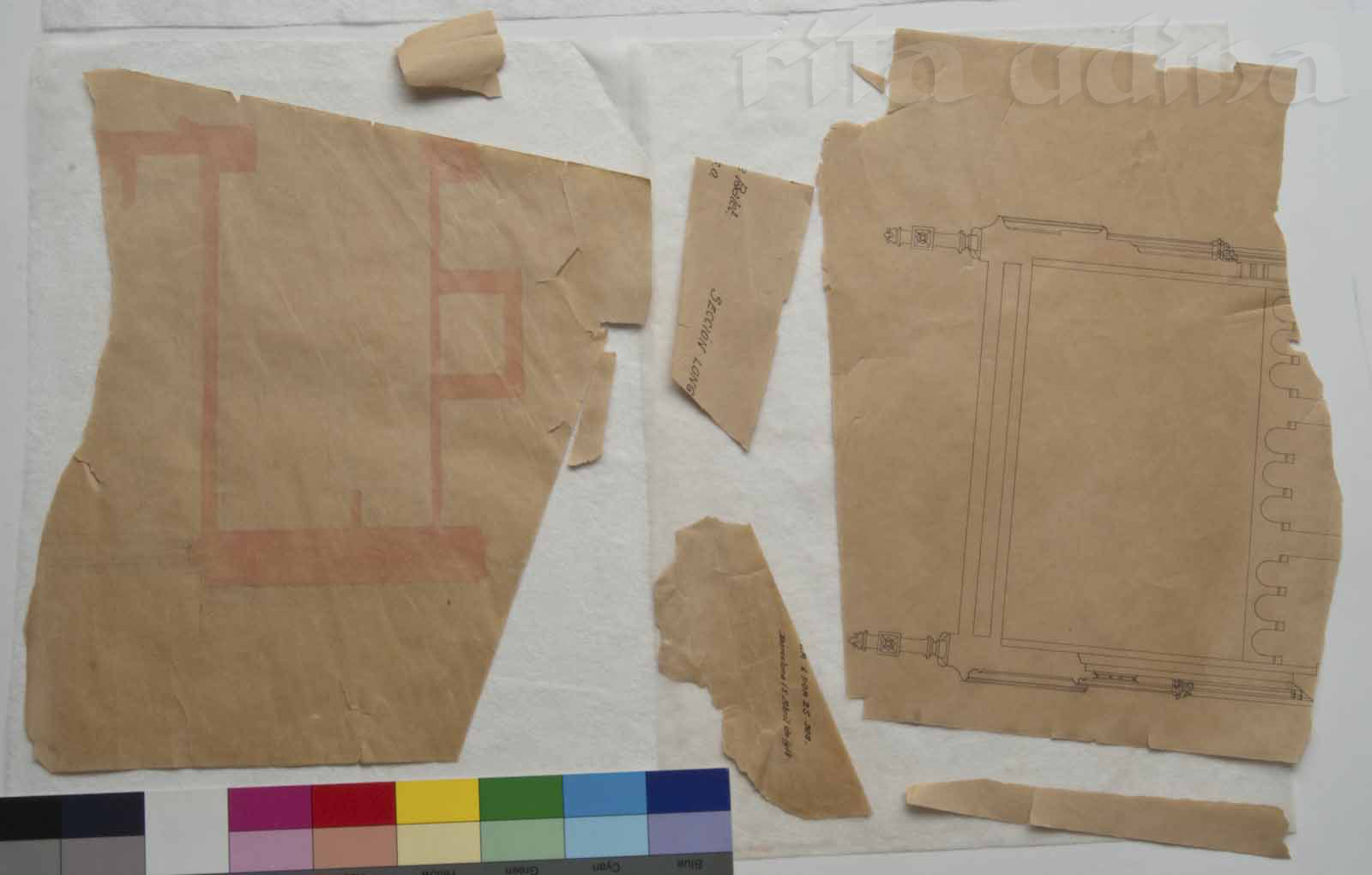 The same document after varnish removal turns opaque. Notice the left fragment (on the back side) shows only the watercolour, whereas at the right one, front side, only ink black lines are visible, but not watercolour. The loss of transparency involves loosing the layers effect it had before, when lines and hand-colour were visible simultaneously on both sides. 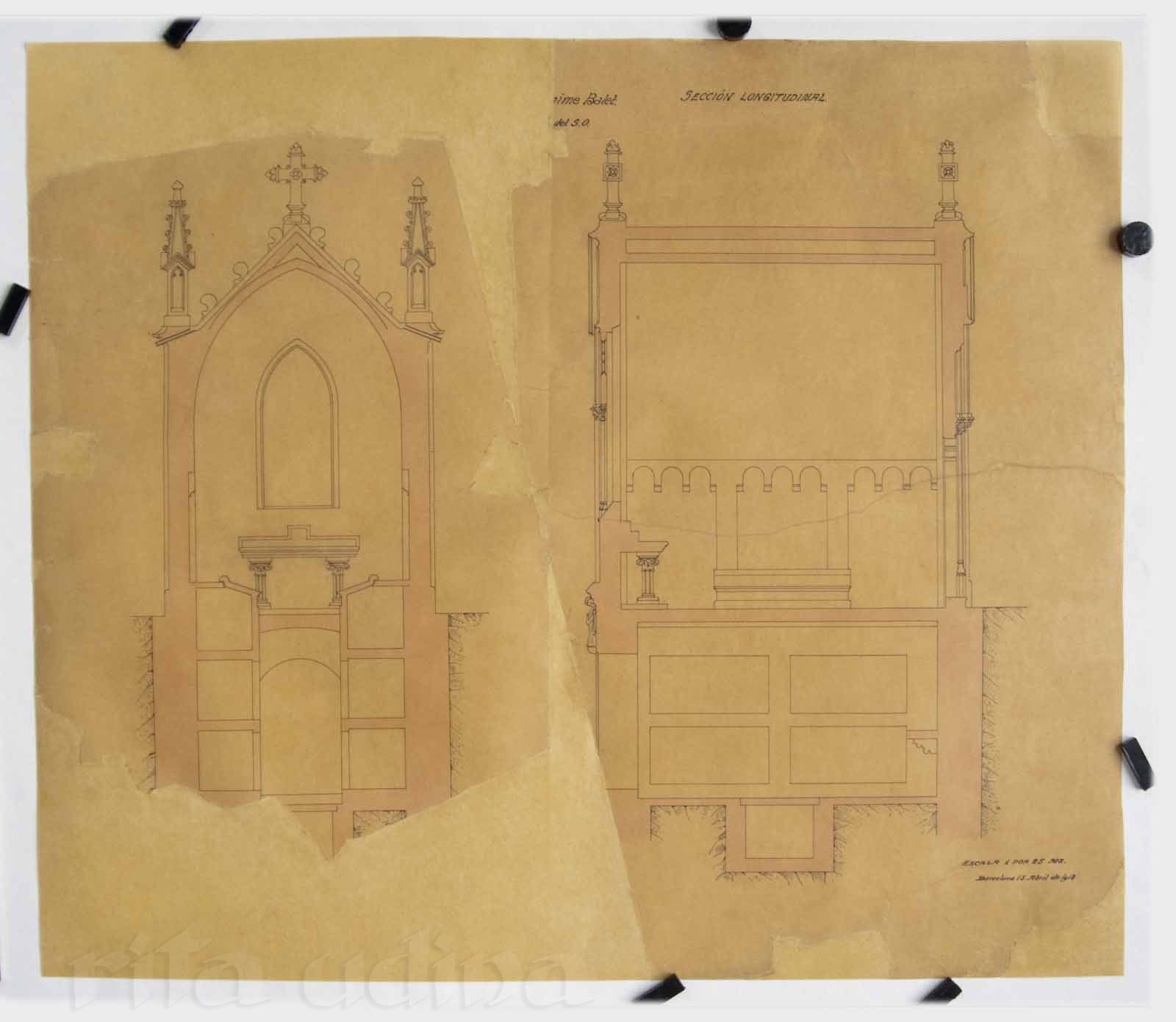 Lining, when needed, or simply reinforcing the most damaged areas. The adhesive can be water-soluble or not, depending on the demands of the document (technique, size, damages…).

Bringing back transparency
Whereas using the original products seems not recommendable because of its visible detrimental effects, many options are still possible: Synthetic resins can be applied to both aqueous and non-aqueous procedures.

Left: Detail before restoration, with cuts where there used to be folds and tears where tehre are wrinkles. Right: Restored draqing, now the paper is much more supple. Notice that it is also slightly more opaque due to the adition of a reinforceing layer on the back. The hidden watercolour by the varnish removal shows again.

Anyhow, these resins would bring the transparency back and also the colour intensity. Yet this step obviously provides waterproofing too, the varnish will not produce any more ongoing oxidation, and it enables enough flexibility to handle the document safely. 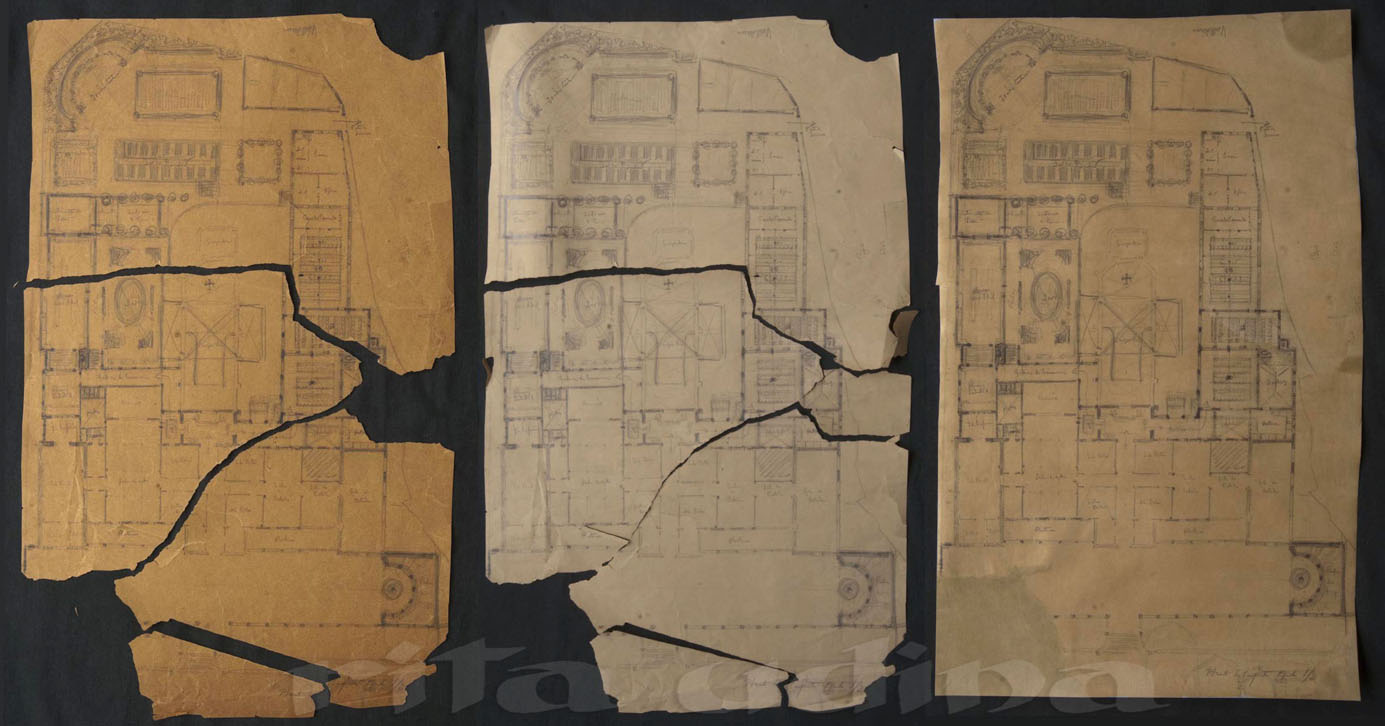 Floor of the Valldemia College. Map on impregnated tracing paper, drawing in pencil. Left: before restoration (an existing fragment is not displayed in the image, the one on the right, although it was conserved). Centre: After removing the varnish, washing and deacidification. Right: After varnishing and lining. Transparency is perceptible on the inserted gaps, which are slightly more thin.

This other video does not want to be embedded, but it shows anyway how difficult it is to make any wet treatment on an impregnated tracing paper (unless the varnish is removed): https://youtu.be/V2JU69q0OfM

This lecture was updated on the 9th July, 2020, as part of the Icon Book and Paper Group #ConservationTogetherAtHome webinar series. You can watch the YouTube video and download the pdf notes of the revisited lecture here.
(I must correct myself in the misuse of the word “rows”, which meant to say “columns”, at the very last slide, from the minute 57′ on.. my appologies for the confusion!)

Aknowledgement:
Historical Archive of the Association of Architects of Catalonia (CoAC); owner of all the plans above mentioned and who trusted me for their conservation. Many thanks!