One of the main concerns in archives and libraries is the presence of mold. Not surprisingly: it develops without fanfare, and when it is detected, an irreversible loss of information might have taken place. Before pulling your hair out, you should identify whether the symptoms actually reveal fungal activity, or not. Not an easy assessment: On one hand it may be due to former infections that are not currently harming at all, and secondly because old papers are so often foxing stained.

And now the million dollar question: Foxing is mold… or what?
There is diversity of opinion… to me, not necessarily.
Foxing may foster microbial presence, but it is not indicative that a paper with foxing spots has actually –or not– mould. A sheet without them may well be fungi infected.
Literature is still vague as to the causes of foxing formation: some may say it is as well microorganisms, while according to others, it is not. The last attribute its origin on the oxidation of metal particles, as reminds us John Swart (thanks!).

Documentary fund from Barcelona Port Authority, manuscripted plans on cloth which show foxing spots on most exposed areas (edges, in the case of the left image, and in the front fold in case of the right image). Click to see larger image.

What is foxing?
Foxing appears as dark spots, brownish (never any other colour which isn’t darkening of paper) in paper or cloth documents, but not on leather stuff. What we cannot deny is that oxidation plays a significant role, and its consequent acidification and the derived cellulose weakening propitiates microbial growth.
Evidence also shows us that environmental exposure to oxygen is –if not its direct cause– a remarkable catalyst, since usually it is most pronounced in the most exposed areas (edges of the sheets, covers, book-edges…). 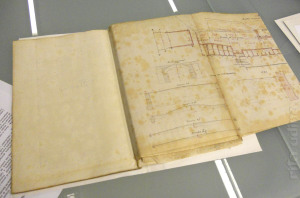 Documentary fund from Barcelona Port Authority. This bundle is made of both paper (left sheet) and cloth (right unfolded plan). Notice how —despite being bound and kept together— sheets in paper (left) have almost no foxing while the following sheets (right) are thoroughly spoted. Click to see larger image.

Foxing also has a very direct relationship with the type of paper, thus some supports are more susceptible to suffer it than others. The image on the right is a good example of it.
A third aspect favors the foxing apparition, which is high relative humidity. This is because the current pollutant components in air suffer acid decomposition in the presence of moisture (CO², S‾², among others).

Foxing acidifies, but ony if the paper were in a very low pH, this increase of acidity would have appreciable consequences on the mecanical strength of the paper.

The “contagion” is never further than to its immediate neighbors (acidity migration), because this damage lacks the possibility to move, while microorganisms sort of do, expanding its activity. Besides, foxing “only” takes place where conditions are favorable. However, the pollution transfer due to air may appear as a similar sympthoms as the contagious effect of an infection.

How to deal with foxing
We can cope foxing by deacidification: Stopping oxidation, reversing acidity, and reducing microbial activity, as this latter shuns alkaline pHs.

Since damage directly resulting from foxing is not alarming, it can also be coped simply using conservation folders or envelopes made with alkaline paper, to prevent its increase. 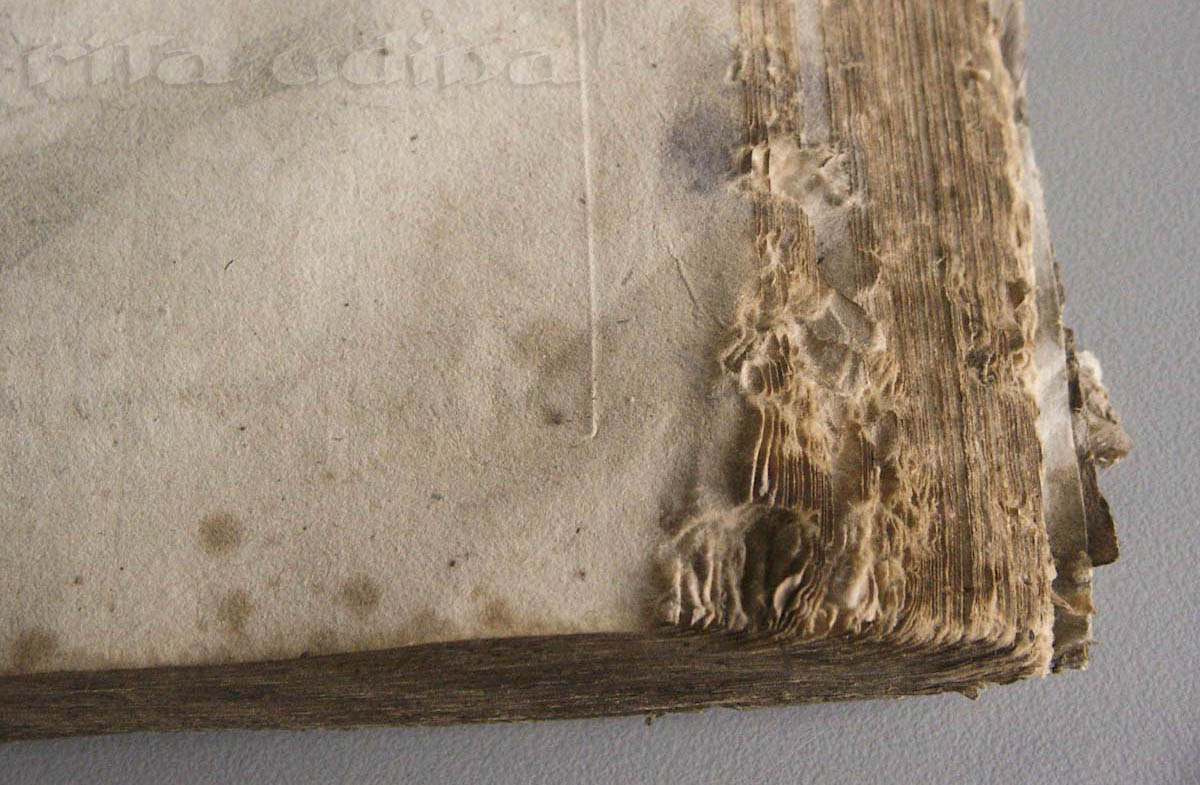 Foxing vs mold
Confusion between mold and foxing is natural, as the same conditions that favor foxing (moisture, slightly acidic pH) are ideal for microbial growth. Moreover the consequences of foxing (weakening and decomposition of cellulose) enhance the idyllic setting for fungi and bacteria (cellulose supports, acidity, moisture… I shall stop or else I do not respond!). 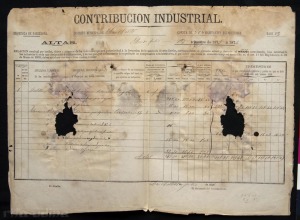 Printed and manuscripted document from 1873. Mold has weakened paper until disapparition (gaps on the center) and has also caused stains in several colurs : purple, black… Document from the Municipal Archive District Les Corts (Barcelona), before restoration. See it also after.

Mold stains, unlike foxing’s, can present a wide variety of colours (purple, yellow, black…). The colour of the stain is not indicative of the type of fungus. The stains may be accompanied by the hyphae of microorganisms (mold). The microbiological attack degrades cellulose weakening it: in the worst cases it acquires a cottony touch, removing its entire rigidity. Unlike foxing, which can be more selective affecting one support more than an other, microorganisms are able to colonize almost all kinds of media (although intensity may vary depending on the type of media). Organic media (paper, leather…) will always be preferred by mold.

In the advanced stages of mold growing it becomes three-dimensional, and is the visible result of microbial hyphae presence. Mould stains can be of various colours (white, yellow, red, green …). Images: Two examples of mold on books.

How to fight mold
Although we would like to apply a single and fulminating treatment once and forget about the problem, there’s few possibilities of success with it. It takes some simple steps, applied consistently and continuously: Maintaining proper temperature and relative humidity, ventilation, cleanliness, and especially periodic eye reviews. Simple steps, so hard to apply thoroughly in big archives, that’s true. The building, climate, and the size of the fund are not issues that can be changed (the building can theoreticaly be modified, in practice…with so many difficulties!). Preventive conservation is then the key.

A preventive mold treatment today does not guarantee that future infections will not occur unless accompanied by this measures, no matter how fulminant the disinfection treatment is. Therefore it is more efficient to modify the conditions of the environment and to regularly monitor them, than using highly toxic products once. And users are also injured, needless to say, in the second case.

And foxing? Although it is a warning that at some stage conditions favored microbial growth, let’s not get that anxious about it. I admit that these spots spoil any document, but damages arising directly are not serious: local acidification. It would have to be extreme to involve loss of content (text) or support. And if you see it in the way, or do not want by no means that it intensifies, I suggest an easy step: call this restorer that will happily solve all this damages.