Are we supposed to fear bibliopaths? Or maybe we should give them an award? Who are they? Atention! Because they can be among us, or we might even be one of them?!

They are victims of bibliophile passion, people touched by an irrepressible instinct to complete, improve, or repair a book. Their intention is good -from their point of view- but the subsequent results of their actions can unfortunately not be so. 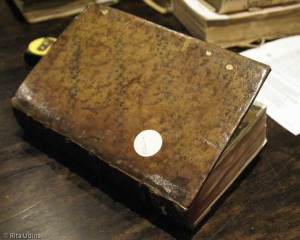 This new section (which will have a brother called graphopaths) starts headed by a fantastic book from 1555, owned by the Cusí Pharmacy Museum from the Royal Academy of Pharmacy in Catalonia. It is Dioscórides Anazarbeo from Dr. Laguna. At first glance I thought it had a lacquered binding, because of the unusal shine of the leather. This technique was very typical (although not exclusive) in floral persian bindings. The lacquered touch and luster were obtained by a lacquer, for an instance shellac, which was wrist varnished on the leather, 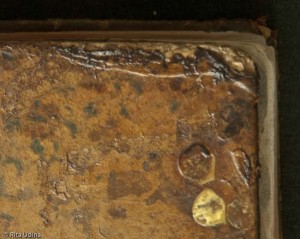 similar as it was done with furniture.

But, looking at it better… No, no! The lacquer was no doubt much later than the binding. We can see it surfacing over the worn cardboard edges, and also over the painting spots (probably wall painting), as well as over the registre of the Library, a paper band on the spine (image above, on the left) which was also soaked in varnish. The major damage caused by the varnish, in this case, was the  ongoing drying of the leather, which resulted in the odd remaining opened of the covers, rather than closed; and a gradual cracking of the raised cords on the spine. That’s why I made a simple test, I cut a small piece of varnish (it was thick enough to!) and burnt it. The unmistakable smell corroborated the suspicion: it was a plastic varnish.

Before the treatment at the studio (above) the book was covered by plastic varnish which cracked the leather and impoverished the original colors.  After removing the varnish (under) the gilding shines again and the leather recovers its naturals elasticity.  The average thickness of the varnish was 612 microns… almost one millimetre!

Here then, a typical bibliopath intervention: When admiring the beautiful spanish leather of the original binding, the previous restorer might have probably thought that a varnish would increase the contrast of colors and prevent the leather against scratches. Yes, indeed… but at what price? The price of a leather becoming progressively cracked, modifying its natural luster, impoverishing the original colors and hampering its normal closing. 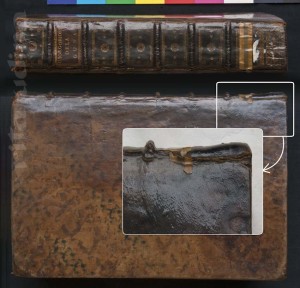 I thought that, maybe, it was an authenthic lacquer binding, which was afterwards varnished again . But that wasn’t so either, because when detaching the little paper band on the spine, the nude leather showed no evidence of other lacquers. And yet it is so: creativity and unpredictable mood are characteristic features of bibliopaths.
He repaired with enthusiasm the tiny tears on the sheets, with heady tapes and other stuff. But our ambitious protagonist did not stop there (in fact anyone can put some sellotapes) and tried to clean the slightly yellowed edges of the leaves with a bleaching agent.

Left: Previous interventions with harmful consequences, such as the bleaching of the edges, which caused water stains and weakened the paper, but also discoloration of the red painted edges. Moreover the “repairs” (scotch tapes and others) oxidize and weaken the paper. Right: at the studio the stains have been treated and the greasy tapes have been removed, as well as the other repairs.

The application of the oxidizing agent (I guess it was hydrogen peroxide) was accompanied by the consequent formation of water stains at the perimeters, and the new stains were more visible than the natural darkening of the paper that was intended to hide. And the areas where the hydrogen peroxide was more intensively applied (the lower corners) were exceedingly weakened by the oxidation effect. But that’s not all, because as the book had red painted edges, some of this decoration was discolored.

However there is a differential fact: there is a report of these treatments written by his author, something that rearly happens, and that shows a scientific, and most of all, lasting will. He doesn’t mention exact products nor proceedings, but the information (and how it is shown) is very useful to put in context everything we find while examining the book. He reserves a discrete position, puting the report at the end of the book (although covering almost the whole marbled paper of the original binding). But, who’s to question the great interest of this restoration?!

Conclusion:
At the end we are all bibliopaths, potencial or voracious, and to judge other’s work doesn’t make us less guilty. Even retrieving ancient’s repairs can condemn us.
Knowing the product catalog commonly used in restoration (or even DIY stuff) does not qualify us as restorers. How to apply them, but especially when, and why, is something that requires an accurate diagnosis and a thorough knowledge of heritage conservation. The goal should always be to ensure a proper conservation of media and a good overall performance. When this is done by a professional the result is often a favorable change of its appearance, but this is rarely the primary objective. However, the search for a notorious visual “improvement”, can never be at the expense of the conservation of the object, especially when treatments cause irreversible damage. The greater interest and admiration we have for an artefact, the greater should be the respect and humility with which we face any treatment therein. 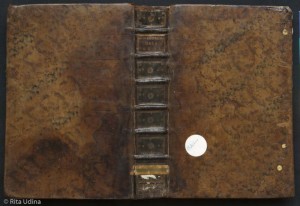 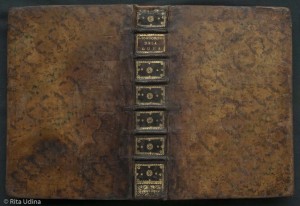 Cusí Pharmacy Museu, located at the company Alcon Cusí, S.A. (Masnou, Spain) and property of the Royal Academy of Pharmacy of Catalonia.

Mr. Amadeu Mosard and Mr. Grafòpata, followers of this blog and inspirers of this new bibliopaths and graphopaths section. Thanks a lot!

And here’s a bibliopath whom I feel very keen on:

8 thoughts on “Bibliopaths: The case of the lacquer binding”