Unfortunately, I do not need to refer to the deplorable attacks in Mosul to find examples of heritage terrorism, as I have personally experienced some in my professional career.
Terrorists do not always carry explosives or mallets, nor they come from overseas, it may even be people in charge of collections, to whom a respect for their own history is attributed. Armed malefactors eradicate heritage

because they recognize in it a value which they want to destroy, while the others ignore the importance of treasures of their own culture, and this blindness is the reason why they are so dangerous.

Medieval binding from Alcobaça collection (12th century, ref. 425), from the National Library of Portugal. With its fastenings in leather and metal, bosses, flap, headbands, the stitched leather ribbon along the edges… and all its original components. An archaeological jewel of bookbinding!

I mean the replacement of bindings by brand new ones which have nothing to do with the original. There are countless cases of ancient books whose covers were ripped to be replaced. A spanish notorious case is the Duke of Uceda, who in the 17th century commissioned the re-binding of his entire collection: 14.000 volumes, among which some greek manuscripts from 9th and 10th centuries (the whole collection is now at the National Library of Spain). All of their sewings, covers, fastenings and headbands were extirpated. Structures and components that tell us about the function for which the book was created: how it was readed, kept, whether it was transported or not, who were their users, what was the purpose to keep that text… endless details that take us back to a lost time, to the materials they handled, their technology, aesthetic tastes and also whether they integrated -or not- knowledge of neighboring cultures, immigrants or emigrants. For an instance aljamiado texts (hebrew or arabic) which might show some peninsular characteristics, while in its inner structure they kept features from their jewish or islamic heart and soul.
But indiscriminate re-bindings are still done in nowadays archives and libraries from most developed countries, when books are stripped from its clothing because they look tattered, useless, or just to have them “well preserved” and evenly bound with the whole collection.
And I must include among terrorists, with deep regret, restorers; for all the times we have shown limited ability to document -at least- interventions of dubious legitimacy. Ours is a very young discipline, there’s still a long way to do, and our codes should also be enhanced to be less vague.

We don’t have enough eyes, hands nor lenses to capture every detail of these wonderful books from the National Library of Portugal.

History of bindings (and many others) refers mainly to rich and rare artefacts, and not to the common majority. Investigation today is still quite complex, not only because of the scarcity of literature, but mostly due to insubstantial catalogs: Only a very optimistic researcher would request in a library a book with specific binding features. Catalogue describers refer mostly to the content of the volume and rarely to its wrapper; and when they do, it is usually unheeding: “limp-vellum”, “ancient”… This is why research on this field (which has keen authors and studies) represents only partially the corpus of surviving bindings. Because of the difficulty to find determined specimens, even in theoretically thoroughly listed collections. 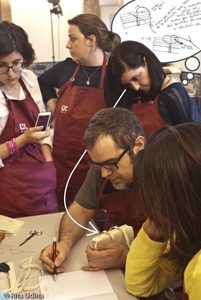 Arsenio patiently explaining how to the sew the headband of the romanesque binding. Sonsoles is dissecting each single move with her radar-view.

But let’s not be that alarmist! I want to give a more hopeful version of this battle against heritage mutilation. A course on medieval book structures has just taken place. I joined it hunger of knowledge, eager to learn more about the technological wonder of medieval books: Each media has its reason to be: the hardness of wood protects heavy books (with parchment leaves) or those whose life was expected to be agitated; the lightness of leather wraps paper ones; flexible threads articulate spines and leafs… Every material so smartly combined so that it doesn’t interfere with the others, on the contrary, creates terrific synergies between them all. In some cases the result is a book that can be flat opened and written at ease. But we can also find bindings for previously written books, which remain cambered while opened… Each one has its peculiarities, its beauty and its function. All of them are worth of being studied: they are a compendium of the technology, culture and art at the time and place in which they were created. 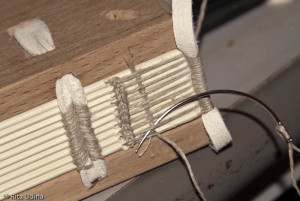 Herringbone sewn on split thong (left). Braided headband (right), for a romanesque binding with wooden boards and uncovered spine. The headband braid could be single, double, triple… countless combinations can be done!

No doubt that my expectations were to be satisfied, Arsenio Sanchez being the teacher and master. It has been three intense days of sewing, sawing, filing and binding books. The best way to understand a headband is just doing it. I came back home proud with my medieval book models and a notebook full of sketches.
The binding frenzy was such that at the flight back I finished one of my book samples, no wonder my neighbor was astonished. Luckily he was quite a reasonable guy and kept from warning security when I threaded my Jack-the Ripper-style curve needle. Sonsoles and Pere were quite restrained too when they caught me sewing book at 7 in the morning, before breakfast.

We did not not need to worry about materials, tools, food… neither for pictures nor apron! Thanks to the excellent organization of Aida Nunes, we could just practice industrious on a renaissance palace, and also have a close look to the exceptional Alcobaça collection of medieval bindings, at the National Library of Portugal. These books claim hours of observation and study, shame there was no time enough for that -I thought-. But at the next day the Arsenio made a sample of one of the structures we saw at Alcobaça!!! I so happily rejoice when I download the photos I took of his sample, unraveling its structure in detail… (plus I bought a book that explains all of them very well!).

Left and right: Sample of a book from Alcobaça, with wooden boards, split raised thongs, and metal and leather fastenings. Suprisingly the inner parchment covers only partially the front cover, and completely the back cover, under the leather, kind of loosing the spine. Leather remains also loose on top and bottom edges, being folded in the inner front cover and extending on the back one as a flap. Once the sample was made, part of the leather and parchment were sectionned so that the sewing remained visible (right).

My vehemence may be exceeding, but I was not the only one who showed this furious bibliophile activity… many others were in the course taking advantage of every single minute. This means that in future generations there will be people to spread curiosity and respect for our heritage, not only the most well-known, but also that one expecting to be studied.
And I do not refer only to those with whom I had the pleasure to share tools and laughs, as the course has been such a success that it will have a second edition in june. For those who want to join it, be aware that it can be addictive and cause unexpected reactions!

Dedicated to Arsenio, reference, inspiration and master who generously shares his knowledge. This post is only the far echo of what I learnt from him.