There are all sorts of projects, and when Mr. Goya knocks at the door, the red carpet is ready to receive him at the studio: Please, come in! 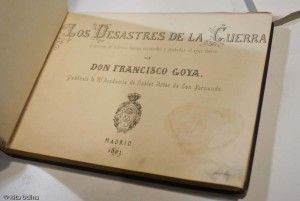 The series of prints The Disasters of War by Francisco Goya arrived at the studio in a fairly intact condition, with its 80 etchings, corresponding to the very first edition (in later editions two more etchings were added, making a total of 82). This first one was edited in 1863, more than forty years after the period they witness (1810-1820), and when Goya was already dead (1828). The prints reflect not only the cruelty of war, but most of all its absurdity. The critical eye of the painter, who acts also as a war reporter, makes this artwork a historical document of prime importance (we must remember that photography would burst in only a few years after): ‘I saw it’ (“Yo lo vi” caption above print #44), ‘And so this’ (“Y esto también”, caption above the next one, #45). A chilling documentation with both technical and artistic quality that I do not dare to qualify. Being able to handle these etchings, to admire them at ease and with no rush, touch them, examine them… reaffirms the feeling of privilege that is being a conservator.

But enough daydreaming, let’s focus! What shall we do to this book? Pull it?! My goodness!!!

Yes: The series came in a bookbinding that seemed to be the original, and I was asked to pull it… At first glance such a proposal didn’t shoehorn at all in any deontological code, and my fear was that the etchings were to be sold apart, disassembling the original issue for ever. I must admit that although I tried to persuade the owner not to do it, I was the one persuaded at the end.  “The thing is to detach the book in order to exhibit its engravings, and bind it again in their original covers after it”, he says. Well… It’s true that 80 etchings can be observed by several people at the same time with minimum risks for the artefact, whereas a book is -in terms of exhibition- much more limited. And we cannot properly consider it an artist book, as the binding can be qualified as merely functional because it was posthumous edited, and without an expressed will from the author to collect the series in a book, and even less with that particular bookbinding. Moreover: books are often pulled to be bound again in order to do conservation treatments… let’s make it worth it, then, and exhibit the etchings during this time lapse so that we can all admire them!

If it has to be pulled, let it be in the more careful way possible, and let the etchings be exhibited with all their dignity, splendour and best condition. While I meditate whether I will go to the hell of conservators, or maybe to its purgatory, all surrounded by bibliopaths; I focus in applying the most conservative treatment possible, and maybe that shortens the purgation. 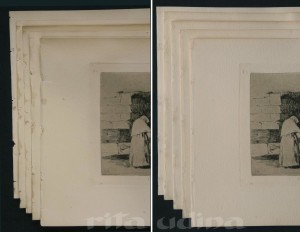 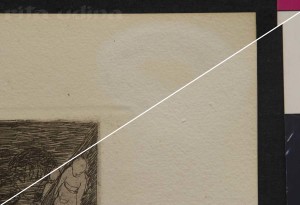 This project has been a real pleasure to work at, not only because of the beauty of these etchings; we must admit that it caused not much trouble. First of all because the prime media is noble: a good engraving paper, but also because they suffered not much damages while ageing. That has been so, that the conservators involved in it (Márk Somogyi and I) didn’t expect a significant change after the cleaning, and surprisingly the improvement has been notorious. 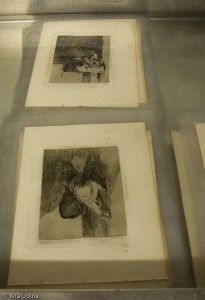 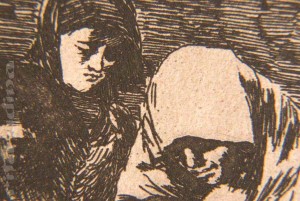 During the wet cleaning the cellulose swells, and the mark of the etching breathes life, as if it just came out from the etching press: the inked in lines scratch the paper with renewed intensity, bringing the paper this particular relief of chalcography. While we remain enthralled with every hatch and every detail, the paper dries out slowly and the whiteness increases and reflects the light more strongly, making the blacks seem more powerful… What a spectacle!
Do not hesitate to visit the exhibition and enjoy it in person (Art Areté Gallery, Escaldes, ANDORRA).

PS: And for technical details of the conservation treatment, click on each image. 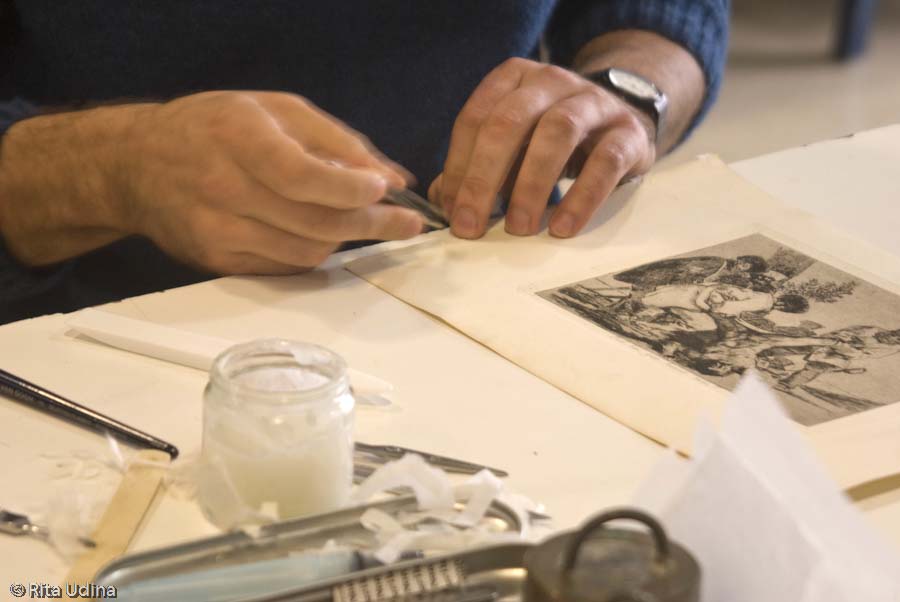