No one would say that Esther feels burdened by the case she is working on: removing an old repair that was deforming some parchment manuscripts. And besides her patient attitude I can’t agree more with her when she says that it is much more complex to treat something that has already been restored, than documents with more notorious damages at first sight. Esther Carrillo is chief conservator at the National Archive of Andorra, and ñ she has seen the most amazing conservation projects in this conservation lab.

She tells me that one of the most peculiar projects she has had to deal with, and also one of the most enjoyed, was the conservation of a notarial registry from 1505, a manuscript in iron-gall ink and limp vellum binding. A feature of these parchment bindings is their flexibility, since there is no inner support in the covers than the lining itself (a parchment). That’s why they are much lighter than bindings that have a board or wood inside the covers. But this bundle was unusually stiff on the spine, and you can imagine their astonishment when they discovered that the stiffness was due to three iron nails hidden in the sewing. Exactly: the thongs of the sewing were iron nails!
In those times the thongs (the structure that holds the sewing) were typically made with leather or parchment, and more recently with cords, or tapes; but… iron?! As far as they know there is no such structure in issues of that age, and the only example I can think of is the bindings with metal pins… already in the 19th century!.

Left: Restored manuscript, opened at the first page. Enlarged (in a circle) the top of the metal nail is visible (i.e. the thong), all covered by thread. Right: The limp vellum binding after conservation. It has flap, knotwork decoration on dyed leather and belt fastening. In the spine we can see non-dyed leather knots that hold the metallic thongs.

During the conservation treatment they picked out all the information left in the original, very much deteriorated, and they could reconstruct the binding with an impressive result. The knotwork and the tinted leather -from which only some fragments were conserved- were returned to its original shape; and also the belt and its buckle, that they modeled on issues from the same holding and age. The losses on paper sheets and on the parchment covers were infilled, yet they were significantly attacked by microorganisms. As for the thongs, they reproduced exactly the same structure found, consisting on three thread encased iron pins. The sewing lay down in these three nails, and then some parchment knots held them together to the covers, through the spine, with the characteristic crossover knots.

Cèlia and Esther wonder if the fact that Andorra is a natural source for iron can be the reason of this rarity… In my opinion the bookbinder was just experimenting. If there are no other examples is because this structure happened to be too costly, or inefficient. Be that as it may, the main thing is that this rarity has been thoroughly documented and also that the conservation treatment has kept unaltered the structure of both bookbinding and sewing. Thus the evidence is preserved and further research is possible: either because it is singular and unique, or because it represents a type of a whole set of similar issues. 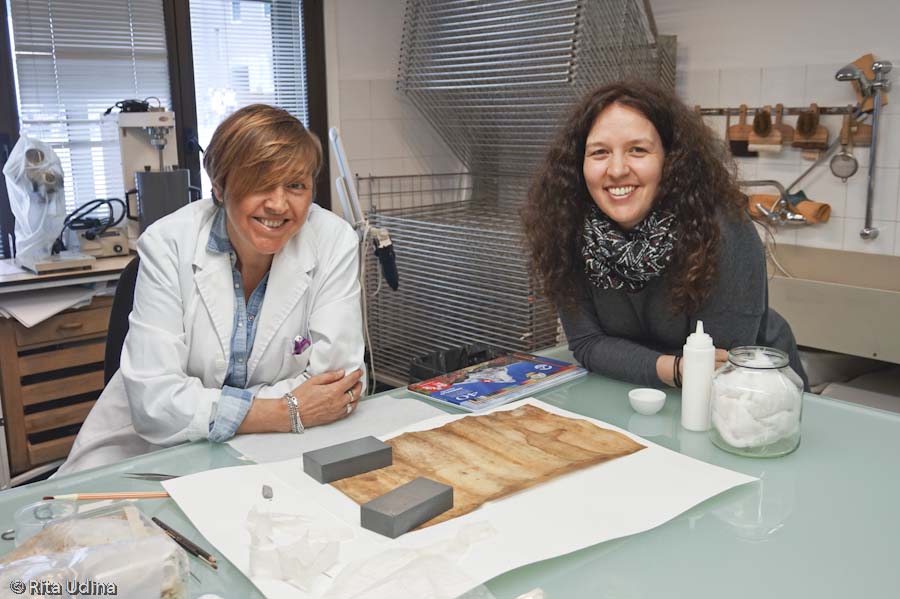 Fascinating discoveries can be found in conservation studios, and it is a pleasure to chat with profession colleagues who, like me, get excited with those as kids solving misterious cases.
Thanks a lot for sharing yours with me!

PS: I am well aware that many of my readers are very much knowledgeable conservators and bookbinders, I am just waiting for all that bunch of iron thongs examples to come to light!