Retouch in conservation, an evolving discipline 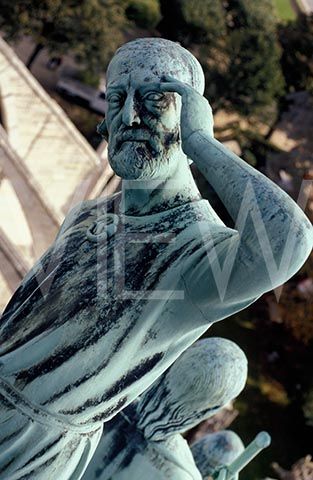 Conservation has evolved a lot from its beginnings regarding criteria. From the restoration intending to give the object an aspect which might have never had, developed by Eugène Viollet-Le-Duc (19th century), to many nowadays’ tendencies that aim to preserve any single addition on the object with the idea that everything is as historically meaningful. There has been, and still is, a wide range of points of view.
Viollet-le-Duc put more emphasis on the recovery of the idea behind heritage (his idea), rather than to the preservation of a particular asset and its own features. This approach lead Eugène to portray himself as Saint Thomas in the recreation of a sculpture of Nôtre-Dame. He was an architect, so the assets he worked on were buildings.
Ethics are for sure the most controversial issue behind a conservation treatment, and probably retouching is among the most sensitive within this set of theoretical statements, since it means to establish the aspect a restored object is expected to have.

All conservators need to deal with decision making and stance on criteria, and those specialized on paper have the drawback that reversibility cannot probably be achieved as straight forward as in other specialities, if ever full reversibility has existed [1].
Here you have three examples of loss compensation on paper. Some of them cover stains and some cover losses, some of them are done on the same original artwork, while other on the infill. Some intend to be the least visible possible, some intend to be visible at a certain distance. In some the loss is “devised”, while others do not involve such critical guesses. Some are fully reversible, others not that much.
I hardly ever feel fully satisfied whenever with these sort of treatments (am I the only conservator that no matter how much I restore keeps on seeing stains and damages?). But still I think that retouching has improved the final outcome providing the object consistency  and readability;  and always seeking to do do it the most reversiblepossible and least invasive.

Is loss compensation a taboo in paper conservation?

Book and paper conservation is mostly attached to library and archival material, and this might be the reason why inpainting and retouching has been considered as a secondary aspect in the whole conservation project, as opposite to painting conservation, for instance,  in which the way to achieve a particular final aspect  is openly discussed.
Is it possible that there is some sort of taboo regarding in-painting in paper conservation?

My opinion is that the looks of an historical object is often almost as important as the physical-chemical condition of the matter that supports it, and not intervening provides poor results that might mislead its readability more than the lack of intervention.
I am giving for granted that this loss compensation has to be done as a result of a thorough study of the object, its function, meaning, context on the collection, and only after all previous treatments have been explored and exhausted (cleaning, consolidation, application of barrier layers, etc.).
Maybe this taboo feeling is due to the assumption of minimal intervention, the paradigm that states that conservation has to be the less invasive possible, leading in the worst acceptation to passivity, to the idea that nothing is reversible enough, distinguishable enough, invisible enough, neutral enough… uh! That it is simply better not to do anything at all. This might risk to lose skills [2] on inpainting and also to polarize conservation principles in private and public practice.

Precisely because it is a tricky issue, it should be done the better possible (the most reversible, even if not 100%, the most neutral, the least invasive, etc.) by expert professionals. This should unify the current standards instead of polarizing them.  Speaking out loud about the issues that we come across when retouching, in-painting and intervening on loss compensation in general, can only lead to an improvement of approaches, techniques and results.

We might all agree that loss compensation is a process that needs to be considered case by case. Even if using software resources to achieve the least arbitrary outcome, the most neutral intervention, there is always a necessary sense of good taste behind it. And this taste or criteria can only be achieved with a collective experience, practice and a background of examples the wider the better.

[And, by the way, there are still a few available places in the course Inpainting & Loss Compensation on Paper Compensation, you can still subscribe here].

The city Council of Sant Cugat (Barcelona, Spain), for providing me the opportunity to work in such a nice object (Example #2) and also the private owners of the 1st and 3rd examples. All these objects required tricky decision making and an acceptable visual result was quite important, making all these conservation treatments challenging and enriching to me. Thanks a lot!