From June, 6 to 8th the conference Nano-systems. Application to tape removal on cellulosic supports, has taken place in Madrid (Spain). Both the IPCE (Institute for Cultural Heritage of Spain) and the MNCARS (National Museum Center for Art Queen Sofia) organized the event.
The conference is an update of the last achievements within the european program for Investigation and Research NanoRestArt.
Antonio Mirabile lead the practical sessions, that had a limited capacity in which I had the privilege to be. Without further ado I am sharing the learnt topics for those conservators who didn’t have the chance to be there. 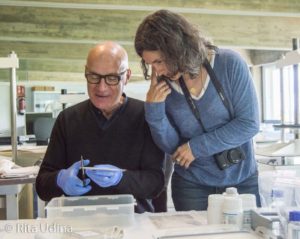 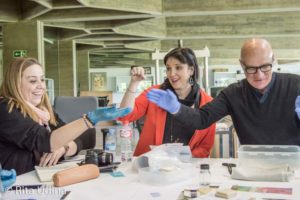 We have already spoken about gels in this blog. We know that there are physical and chemical gels, which can be differentiated by the sort of bond that links the monomers. To our intents and purposes there are not much differences: they are transparent, or almost, and their mechanical strength is enough to be normally handled without breaking.

The main chemical feature of these gels is that they are synthesized by interpenetration (IPN: Interpenetrated Polymer Network). Meaning that two or more networks (polymers or monomers) are entangled in a way that cannot be separated. For the case of gels, it is usually composed by two networks, one of them with high mechanical strength and another one which is highly hydrophilic. The first has poor hydrophilicity and is no permeable to macromolecules, micelles and microemulsions, but the second provides these characteristics after they are both cross linked. There are also semi-interpenetrating systems, in which the cross linking is not full, but only one of the components is. No chemical reaction occurs between the two components, and yet Interpenetrated Polymer Networks can be described as quasi single-phase materials.

At the same time we can categorize them in organic or hydrogels, and this other classification is quite crucial regarding its application: organogels can be mainly soaked in organic solvents, whereas hydrogels can be soaked mostly in water (yet a certain proportion of organic solvents can be admitted). There are also amphiphilic and organo/amphiphilic gels which I guess would be in between hydro and organo, but we didn’t see any of those.

From what’s said up to now, we can sort gels according to this table:

Left: organogel soaked in a non polar solvent in order to swell a duct (or duck) tape adhesive. Right: Peggy 6, hydrogel soaked in distilled water in order to remove tide-lines (left, bottom) from a board. The gel has already absorbed part of the dirt on the stain.

According to the speech by Dr. Piero Baglioni from CSGI-CCSS (Center for Colloid and Surface Science), hydrogels can be used in a range of pH between 2 and 12, and temperatures among 0 and 95ºC, that is to say a wide range of possibilities.
As regards to organogels, the pH would not apply since this compound lacks aqueous ionization, as well as the akin solvents. And the range of temperatures is even wider: -5 to 180ºC.
However, the temperature should be minded in both cases, hence the behaviour of the gels in the extreme values can be different from the behaviour in moderate ones. It is clear that its absorption capacity might change with temperature, because capillarity -the diameter of the capillary vases- can be modified.

What I liked the most from all that we had been trying in the practical sessions is the fact that these gels allow major control: the solvent (whether it is aqueous or organic) does not leak at all. I’ll give an example: we let a drop of a particular solvent fall onto an ink inscription, which immediately started to bleed. Then we soaked the gel with the same solvent, and put it on top of the same inscription (in another spot) and then the ink under the gel did not bleed at all! Just a light loss on the ink surface could be noticed, after removing the gel, but not any stain or tide-line on the paper. According to Antonio Mirabile, this serendipity made them conclude that these gels can be used as a resource for sample collection. The use of gels in this way enables analysis that most of the times cannot be done because the information of the support (the paper) prevails over the information of the ink. But when absorbing this tiny spot of ink, which leaves the cellulose aside, the same analysis can be done without interferences and the required selectivity. 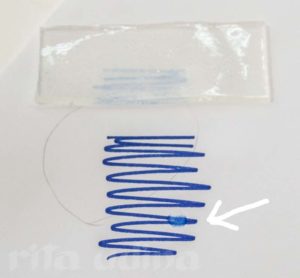 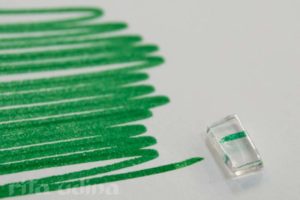 These gels have other advantages: they bear enough body so that no remnant of it is left after use, which does not happen with other much common gels1 (hydroxypropyl cellulose -Klucel®-, methyl cellulose, etc., that remain partially or totally embedded on the support, depending on how we use them).
And they are reusable! They just need to be rinsed in distilled water in order to be used again. We can soak them in the most suitable solvent (whether it is organic or hydrophilic, of course), use them, and then wash them and keep them in the appropriate solvent (distilled water in the case of hydrogels, and a non polar solvent in the case of organogels).

The application in the conservation field is obvious: removing tide-lines and stains, or apply particular solvents in the most controlled way, either for tape removal or other purposes (and later on I’ll get back to tapes).
It is a pitty that the organogel is not yet available, because for aqueous solutions there are plenty of gels, thickeners and further stuff, but for whatever related to solvents one is always wishing there were more options.

We also tried microemulsions, using gels as a medium. These are transparent, unlike normal emulsions that are milky or cloudy, since the colloidal dispersion happens in the microscopic level (among 5 and 150 micrometers). “Normal” emulsions is most of the acrylic polymers, or mayonnaise, which seem to be a single liquid but it is actually a colloidal dispersion of more than one, where each of them has opposite polarity, like water and oil, in the case of mayonnaise.
I am sure that sooner or later I will find a practical application for microemulsions, but I must admit that I don’t see in them such a wider range of application as for gels, for the simple reason that they have a surfactant, which is the one that coheres and allows this colloidal dispersion of immiscible liquids. I guess that there will be particular occasions in which the microemulsion will be of great use, but in my opinion we must differentiate them clearly from ordinary solvents, which simply evaporate leaving no remnant at all. The surfactant in the microemulsion could somehow remain in the artwork, or at some point even react -unnecessarily- with it or any of its components. And, precisely because colloidal dispersions are not stable in the long term (the conforming liquids curdle, separate back) these microemulsions are sold in two different components that need to be mixed, and which have a limited shelf life once they are prepared.

The main advantage of the microemulsion is that it can be much more efficient when it comes to swell or remove certain compounds, since the microemulsion bears different solvents which should not be miscible normally and each of them has different polarity. These different polarities offer more chances to be akin to the compound we need to remove.
The one we had the chance to try was Nanorestore Cleaning® Polar Coating S, that can be also referred as EAPC because it is formed by Ethylene Acetate, Polypropylene Carbonate, 1-Pentanol and water. It also contains an anionic surfactant, Sodium Dodecyl Sulphate (SDS) but if you click on the link you will see that there are other microemulsions with non ionic surfactants (such as Nanorestore Cleaning® Polar Coating B, or MEB, meaning de Methyl Ethyl ketone and 2-Butanol), non polar (to clean waxes) and more varieties.

But the gels can be used with whatever solvent we want, it doesn’t have to be a microemulsion. In the practical exercises we used diethyl carbonate ((C2H5O)2CO), for instance, besides from water and others.

And I must mention that NanoRestArt has considered very much the safety by design of these mixtures, taking good care of our environment and health for potential users. A gauntlet of tests has disregarded the most contaminating/toxic proportions, so that the resulting product has acceptable toxicity levels (as long as its use is the appropriate).

Let’s focus: the goal of all this chemistry and products was to better remove the damn tapes. And Antonio Mirablie made a fantastic summary about their composition:

As we can see, there are two main adhesives: acrylic and rubber based (rubber can either natural or synthetic, like masking tape).

And regarding the backings we find fabric, paper and plastic. Well then, in plastics there is a classification that matters especially, which is porous backings (acetate based, like the translucent MagicTape®) against non porous backings (polypropylene based, or either vinyl and others, which are usually glossy). And why sorting by porosity of the backing? For practical reasons: porous tapes will allow the solvent to swell the adhesive, even when applied through the backing, whereas the rest will not. And another very important reason: porous backings will melt in acetone. If our goal is to make the tape disappear, it’s OK, but watch out if we need to keep it! Even when wanting to remove the tape, it is not wise to leave the support impregnated with this plastic… it is better to remove it mechanically in advance, avoiding its swelling/melting. 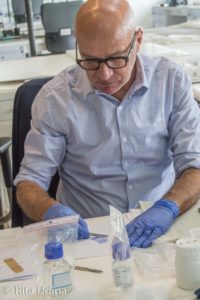 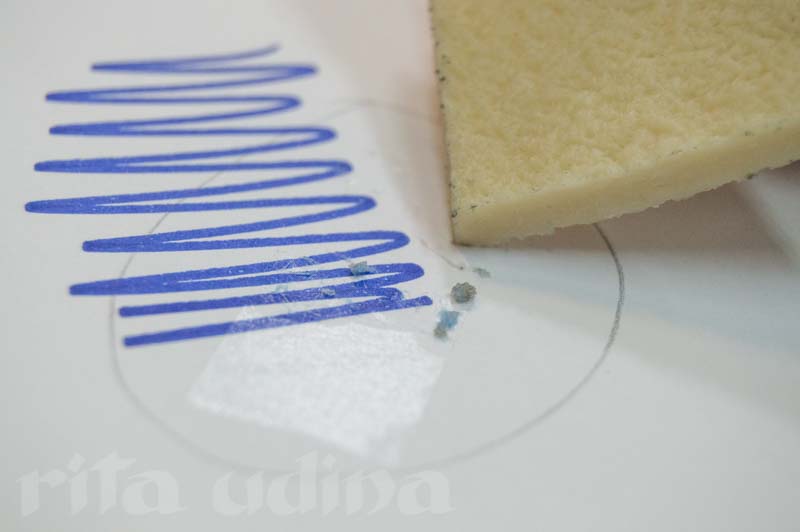 The above mentioned solvent -sodium diethyl carbonate- could be of great use for tape removal, because it doesn’t melt any of the backings, neither bleeds -in general- common and contemporary inks (ballpoint pen, felt-tip pen and other very fugitive inks).

But why would we want to preserve the backing of an adhesive tape? Well, there is the more and more original artwork that contains it, being part of it and even having the ink on top of it; in which case it would not be licit to simply remove it. The dilemma lies in the conservation, since we know these adhesives damage the paper.
I have a couple of examples on how to proceed in these cases, here they are: 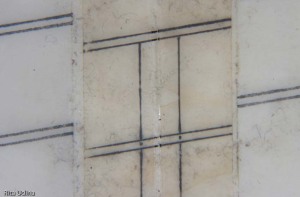 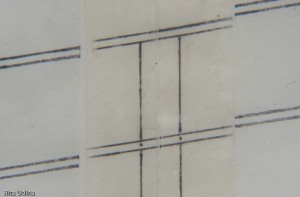 However, if I had to do this now I am sure it would have been much easier with such amazing products!

Acknowledgement:
Antonio Mirabile, for his splendid speech and practical sessions about the use of gels. Also to the representers of IPCE and MNCARS, which made possible this conference, with marvelous organization and providing maximum dissemination to this european project of such interest for conservators.